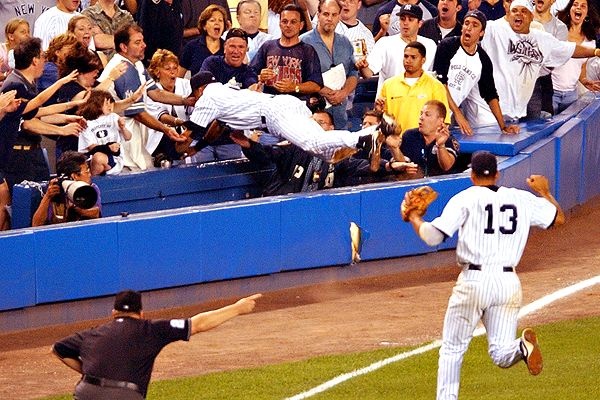 SHARE
I recently suffered a major disappointment. My beloved Yankees were embarrassingly swept by the Detroit Tigers in the American League Championship series.
While they have lost postseason series before, it has been decades since the Yankees were last handed such a sounding defeat. It was painful to watch. It made me think about the causes of this failure. And while people can point to an unprecedented hitting futility by all the key players on the team as the primary reason for this loss, I believe the reason lays elsewhere—Derek Jeter.
It’s the first postseason series since Jeter has first put on a Yankee uniform that he was unable to play. This happened after he suffered a serious and painful injury during the first game of the series.
The team is simply not the same without him. He’s not just the team’s captain, he is their true leader. And he’s been their leader for the past 15 years. Furthermore, he’s not the best player on the team, nor is he a vocal leader. He leads by example.

What Makes a True Leader

It also got me thinking about what makes some people stand out as true leaders, sometimes without the formal role, while others, just as talented if not more, fail to lead.
I think the main ingredients in Derek Jeter’s leadership, which exist in other true leaders, are: trust, confidence, and courage.
I already wrote in length about the importance of trust in leadership so I will not repeat it here.
Confidence is the confidence your followers have in you as a leader. It’s based on your demonstrated competence and skills, and the trust that you would always put the team’s goals ahead of your personal objectives.
I would like to focus more on courage. I believe it’s a critical attribute of true leaders. This applies to leaders in sport, military, politics, and business.
Great football quarterbacks become true leaders of their teams when they demonstrate to their teammates that they not only capable of making great throws and score touchdowns, but are also willing to stand in the pocket and take a hit in order to complete the play successfully, and when needed, sacrifice their bodies for the team.
This is what Derek Jeter has done throughout his career. He has never won an MVP award or a batting title. Others hit more and longer home runs than he does. But no one demonstrates more selfless courage and determination to do whatever it takes for the team to win.

True business leaders demonstrate their courage in decision making; making the right choices; always trying to do the right thing, even though it may not be easy, or might require some sacrifices; being accountable for their decisions and actions at all times, and have their people’s back even when they fail or make a mistake.
True leaders don’t concern themselves with whose responsibility or job this is, or what others are doing about it. They don’t think about their own personal gain or loss. They just do what is necessary and set an example for others to follow.
I think the following quote by Winston Churchill describes it best: “It’s not enough that we do our best. Sometimes we have to do what’s required”.
Follow
SHARE

One thought on “The Mark of True Leaders”