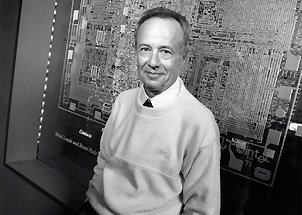 Andy Grove, Intel’s legendary CEO, has famously coined the term: “Only the Paranoid Survive“. He referred it to several aspects of his professional and personal life experiences.

In the business setting, he meant that a company that wishes to have long-term, sustainable success should never rest on its laurels. He argued that a company should constantly transform itself in order to maintain its market leadership position and business growth. This means to allow people to test new technologies, new products, new sales channels, and new customers. And, to be ready for disruptive shifts in business or technology.

It also meant that a company should always be vigilant about its market environment. Also, it needs to be alert to spot potential threats and risks. It should always strive to identify its competitors early and crush them before they become a real threat.

For many years Intel has practiced this philosophy successfully in the PC market.

Being Overly Paranoid is a Disadvantage

However, I believe that this paranoid mentality, if misinterpreted, can also become a detriment to a company’s own growth. In particular, if companies become overly paranoid to the point of complete lack of trust towards their partners, suppliers, and customers.

This is a harmful attitude for any company, and especially, start-up companies. Start-ups in their early stages are vulnerable. They often have to rely on partners and allies to develop their product, reach their customers, and grow their business.

Indeed, companies should adopt a fighter pilot’s mentality when it comes to dealing with threats. Constantly scan their environment (their own industry and related industries) for possible threats. And, when they detect a threat, respond fast and decisively to eliminate it.

The Value of Partnerships

And yet, in today’s fast-changing and competitive world, no one company can make it on its own. It must rely on its people, partners, suppliers, and even its user community to continuously provide value to its customers.

At the end of the day, any company, no matter what size, has a limited set of core competencies. Things it can do extremely well, and better than any other company. This concept has been first introduced by Gary Hamel and CK Prahalad in their classic HBR article “The Core Competence of the Corporation“. It was also discussed by Jim Collins in his book “Good to Great“. This is very true and even critical for start-up companies who are typically limited in cash and resources.

Case in point, even the mighty and wealthy Apple failed in its attempt to develop its own map application. Perhaps it would have served its customers better by partnering with an already successful map application provider, such as Waze.

Another example is Microsoft. Despite its many years of dominance in the PC OS space, it has been far less successful in developing an equally dominant mobile OS. And you can easily find similar examples in any industry you examine.

To succeed a company must focus on its unique value. On those things, it can do better than others, and that also generate the most value for its target customers. In addition, it needs to partner with other companies in order to complete and complement its value offering.

A good example is Google.  It develops its Android mobile OS, and partners with handset OEMs, including Samsung, LG, Motorola, and others, to deliver a complete mobile phone solution to its customers. Today, Android-based smartphones are by far outselling their rivals; including Apple’s iOS-based iPhones.

This type of partnership requires trust and mutual respect, along with shared business goals. In my humble opinion, it’s a must for companies who wish to compete and succeed in today’s and tomorrow’s world.

What do you think?